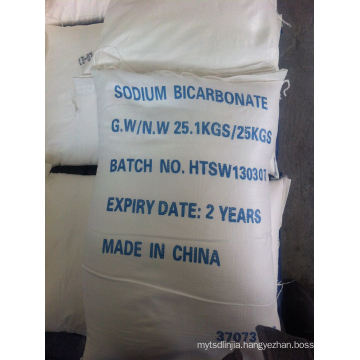 Product Description Sodium bicarbonate or sodium hydrogen Carbonate is the chemical compound with the formula NaHCO3. Sodium bicarbonate is a white solid that is crystalline but often appears as a fine powder. It has a slight alkaline taste resembling that of washing soda (sodium carbonate). It is a component of the mineral natron and is found dissolved in many mineral springs. The natural mineral form is known as nahcolite. It is also produced artificially.

Cooking
Main article: Leavening agent
Sodium bicarbonate is primarily used in cooking (baking) where it reacts with other components to release carbon dioxide, that helps dough "rise". The acidic compounds that induce this reaction include phosphates, cream of tartar, lemon juice, yogurt, buttermilk, cocoa, vinegar, etc. Hence, sodium bicarbonate can be substituted for baking powder provided sufficient Acid reagent is also added to the recipe. Many forms of baking powder contain sodium bicarbonate combined with one or more acidic phosphates or cream of tartar.

A wide variety of applications follows from its neutralization properties, including ameliorating the effects of white phosphorus in incendiary bullets from spreading inside an afflicted soldier's wounds. Sodium bicarbonate can be added as a simple solution for raising the pH balance of water that has a high level of chlorine, such as in swimming pools and aquariums.


Medical uses
Sodium bicarbonate is used as an antacid to treat acid indigestion and heartburn An aqueous solution is administered intravenously for cases of acidosis, or when there is insufficient sodium or bicarbonate ions in the blood. This compound has also been used as for patients who have had a ureterosigmoidostomy.
Adverse reactions to emergency administration include congestive heart failure, with edema secondary to sodium overload, and the metabolic complication of hyperosmolarity, metabolic alkalosis, and hypernatremia.

Sodium bicarbonate may also be used as an anti-fungal for dandruff caused by fungus.


As a cleaning agent
A paste from baking soda can be very effective when used in cleaning and scrubbing.
For cleaning of aluminium objects it is to be discouraged as it attacks the thin unreactive protective Oxide layer of this otherwise very reactive metal.
A solution in warm water will remove the tarnish from silver when the silver is in contact with a piece of aluminium foil.
Has been used for many years informally as a tooth whitening agent.
According to The Joy of Sex it can be used in a solution with water to remove dried semen from upholstery. Contact us if you need more details on Bicarbonate. We are ready to answer your questions on packaging, logistics, certification or any other aspects about Hydrogen Carbonate、CAS Number 144-55-8. If these products fail to match your need, please contact us and we would like to provide relevant information.