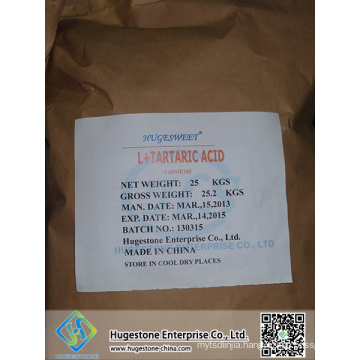 Product Description Tartaric acid is a white crystalline organic acid. It occurs naturally in many plants, particularly grapes, bananas, and tamarinds, and is one of the main acids found in wine. It is added to other foods to give a sour taste, and is used as an antioxidant. Salts of tartaric acid are known as tartrates. It is a dihydroxy derivative of succinic acid.

Tartaric acid was first isolated from potassium tartrate, known to the ancients as tartar, c. 800 by the Persian alchemist Jabir ibn Hayyan, [citation needed] who was also responsible for numerous other basic chemical processes still in use today. The modern process was developed in 1769 by the Swedish chemist Carl Wilhelm Scheele. The chirality of tartaric acid was discovered in 1832 by Jean Baptiste Biot, who observed its ability to rotate polarized light. Louis Pasteur continued this research in 1847 by investigating the shapes of tartaric acid crystals, which he found to be asymmetric. Pasteur was the first to produce a pure sample of levotartaric acid.

Tartaric acid may be most immediately recognizable to wine drinkers as the source of "wine diamonds, " the small potassium bitartrate crystals that sometimes form spontaneously on the cork. These "tartrates" are harmless, despite sometimes being mistaken for broken glass, and are prevented in many wines through cold stabilization. The tartrates that remain on the inside of aging barrels were at one time a major industrial source of potassium bitartrate.

However, tartaric acid plays an important role chemically, lowering the pH of fermenting "must" to a level where many undesirable spoilage bacteria cannot live, and acting as a preservative after fermentation. In the mouth, tartaric acid provides some of the tartness in the wine, although citric and malic acids also play a role. Contact us if you need more details on Tartaric Acid. We are ready to answer your questions on packaging, logistics, certification or any other aspects about Tartaric、Dl Tartaric. If these products fail to match your need, please contact us and we would like to provide relevant information.